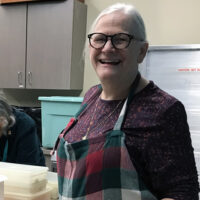 After 21 years of service, Navy Commander Dianne Daniels and her husband fell in love with Gold Beach, built their forever home, and retired here in 1999. A lifelong reader, Dianne loved managing the Hospice Rummage Market’s “Book Nook” for thirteen years. She appeared bi-weekly on KURY radio’s Voices, and also volunteered in Curry County Fair’s Fiber Arts Department. Dianne joined Friends of the Library and became secretary in 2020. She stepped up to the plate to take on the dual…and labor-intensive… roles as President/Secretary in 2023. Dianne is an incredible baker, and co-chaired two Friends’ bake sales…personally baking all sorts of delicious treats. When not baking, reading, or knitting, Dianne can be found playing dominoes with friends or roaming her 10 acres. 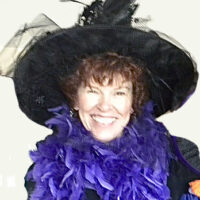 Sandy found her “tribe” at Curry Public Library soon after she and her husband, Bryan, retired to Gold Beach in 2004. She was appointed to the library’s Board of Directors in 2005 and currently serves as chairman of the Board. She joined the Friends of the Library in 2006, and personally participated in fifty-seven fundraisers during a three-year capital campaign to build our new library on 3rd Street. Her entire social life during that time was tax deductible! She has served as treasurer and as president of the FOCPL, but she primarily likes designing flyers and bookmarks to publicize Friends’ events. She has chaired the “Month-Long Silent Auction since its’ inception in 2010, and she and Bryan co-chaired the last two “Great Book & Bake Sales.”

Jeanie, and her husband of 40+ years, moved to Gold Beach in 2016, and she joined the Friends of the Library soon after. She is a super-energetic, take charge member of the Friends, actively participates in meetings, and volunteers for every one of our group events. She originated the fundraising idea of writing personalized letters from Santa mailed from the North Pole, and has chaired the effort for three years. She is a member the Red Cross, and has been tasked with a variety of assignments when deployed to Kentucky, Texas, Iowa, California, and North Carolina after natural disasters occurred in those areas. She is also treasurer of our local Community Center, and volunteers there two days a week. Busy woman! 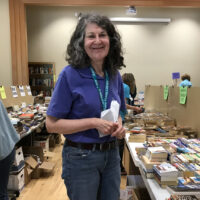 Terry Shannon and her husband, Craig, moved to Gold Beach in 1991 and have spent 31 years transforming their 3-acre property into a garden paradise. After working as a respiratory therapist for twenty years, Terry began a writing career, and was published in a variety of genres. Being an author makes her a unique and invaluable member of the Friends organization. Her passion for reading and her unbridled (and generous) support and advocacy of our library epitomizes the Friends’ mission statement to “promote public awareness of our library and all its offerings.” Besides reading, Terry and Craig walk the beach every day, and they spend a serious amount of time gardening, researching plants, and spending their children’s inheritance at Dragonfly Nursery.

Friends of the Library

The Friends of the Curry Public Library's next meeting will be IN-PERSON on Tuesday, February 21, 2023, at 9:00 a.m. in the meeting hall in the library. There will be a continuing discussion about how individual members can promote library programs, and there will also be a discussion about the Friends' participation in the upcoming "Non-Profit Fair" that will be held on April 15th.
Please watch for an email message on Thursday, February16th from Friends' President, Dianne Daniels, with attachments: (1) agenda for the upcoming meeting, and (2) minutes from the January 17th meeting.