Though a graduate of Gold Beach High School, Jim didn’t move back to Gold Beach until 2005. He is a graduate of the University of Oregon, with a degree in English Literature/Creative writing. Jim has been a member of the Friends since 2014, when he decided that since he took advantage of the book sale every year, he should help organize it. He has also been on the organizing committee for the South Coast Writer’s Conference for almost ten years and tutors writing for SWOCC. Jim has published five novels, using his legal name “James Boyle.”

Before retiring to Gold Beach in 2014, Judi worked for the California Public Employees Retirement System (CalPERS), educating members and contracting agencies about retirement and retirement law. She joined the Friends in early 2015 when she volunteered at the Book & Bake Sale, and has been active in the organization ever since. She has chaired the labor-intensive Book & Bake Sale for three years in a row, and has implemented some ideas that have made shopping for books easier for our customers. When she is not reading or walking on the beach, Judi volunteers at the Cape Blanco Light House and the Historic Hughes House. She is a Red Cross volunteer, and helped run the Gold Beach shelter during the Chetco Bar Fire in the fall of 2017. 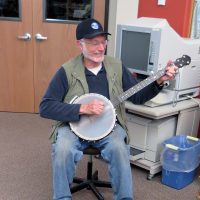 Before retiring, Paul was a professional ceramic artist, taught art at Gold Beach High School, and is currently the editor of the Curry Arts Newsletter. He has been treasurer for the Friends of Curry Public Library for the past four years. Paul is not only our numbers guy, he is our go-to guy for hauling booths and boxes of books, installing lights and backdrops, and providing any gadget we need from his toolbox. He knows everyone in town, and serves on several boards.

Lorraine and her husband, John Lowe, bought their home in Gold Beach in 2013, and have lived here happily ever after. Born and raised in Southern California, Lorraine worked in elementary education in Orange County for 34 years. She applied for a staff writer position with the Curry County Reporter in 2014, and has been dazzling the community ever since with her insightful, accurate reporting and phenomenal photography. Known for her hyperbole and her uncanny ability to duck all Friends events until the end of the year, Lorraine hopes to improve her record of service in 2019. Despite her previous comments to the contrary, Lorraine has worked as the marketing arm for the Friends, and has written many of our press releases. Luckily for us, she has connections and they always get published. 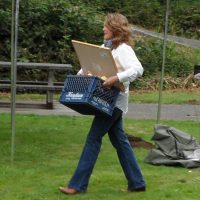 Board Member at Large

Maureen taught grade-school in Coos Bay for 30 years, and after retiring to Gold Beach twelve years ago, became a member of the Friends of Curry Public Library. She was president of the Friends 2008-2010, has been a member of the Curry Public Library Budget committee since 2012, and co-chaired Party in the Park for the past three years. Maureen is funny and irreverent, and wields a giant squirt gun at Party in the Park, offering the “WATER OPTION” to every child running the Friends’ obstacle course. Little do they know what they are getting themselves in for!

View our progress in meeting our donation goal for the Library Learning Center project.